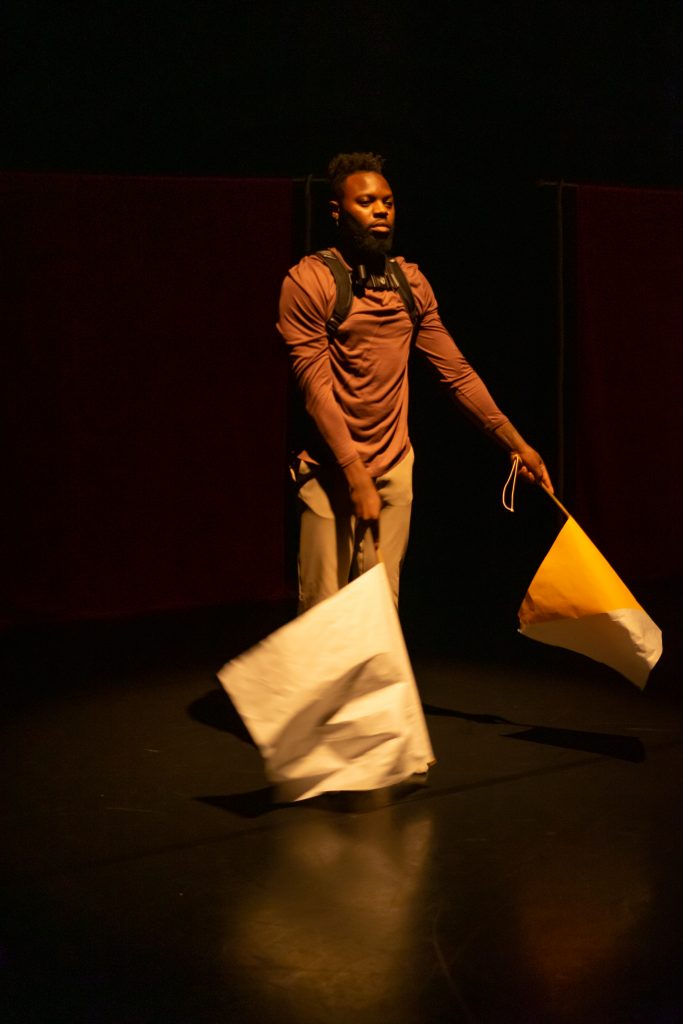 It seems invidious to apply words, mere interpretation, but nonetheless I shall try to at least put down some responses. Note that this is all drawn from notes I tried to hurriedly scribble down on the night after the performance; they are very much unfiltered and I think that’s best.

It did emotional things to me (that stayed with me) that I found I didn’t entirely understand. I didn’t care. I’m going to risk saying ‘I felt it in my heart chakra’. The outside world seemed very mundane afterwards. I had been forced into the present moment, rather than into an interpretative place, the kind of thing that theatre would insist upon.

I had brought a friend, Amy, with me. We are both, in our different ways, doing practices concerned with awareness and consciousness, she from a shamanistic tradition and me from a vajrayana one, which is very body-based, very physical. When she and I talked about it afterwards she said something which I thought captured it very well. She said it was like watching and experiencing energy being moved around. There were movement sequences that seemed to be drawn from the martial arts – and all their related practices. We both felt that in the theatre space it was like being inside a meditation gong – especially when the sound got to a point where it was so loud it was vibrating the floor and us. It was quite alarming at times.

The word that came to me most strongly was ‘visceral’: it hit me in the spine; I was being meditated. It unfixed me. This is a terrible thing for a theatre person, we like to interpret things, but this was impossible and unnecessary. It was – and remained – in my body. Later I realised it had shifted me out of myself into an observational state (that might seem like an odd thing to say; meditation practice revolves around the idea of moving from a subjective place into an aware place, which you can’t do unless you can become a true observer). I found I wanted to stay in that physical state as long as possible (I’ve written on my notes ‘I’m still shaking as I write this an hour later.’).

Amy and I are both enormous fans of Bachelard’s “The Poetics of Space” in which he talks about the inexplicable but emotionally palpable (perhaps, again, ‘visceral’) poetic image and we were talking about this just before we went in. I had been talking about my “difficulties” with dance, partly because I don’t know what the term really means, and I am intellectually unable to grasp it. And then I/we experienced 45 minutes of a gorgeous poetic image in space and movement.

The move from the theatre space to the reception space was genius. All the energy that had been coursing through my body was released into silence. I remember having this broad grin on my face and I almost burst into laughter. And then this would swing into thinking I might start crying. It was quite extraordinary.

In the theatre space the different sequences were wonderful. The overlap of light, dark, movement, stillness and that astonishing sound/noise. When that dancer had the web of red light projected on to her, the twin movements of the dancers behind their separate screens, the flags, I don’t really understand how it worked as a piece, but it did.

It was utterly beautiful and moving (both literally and metaphorically, or perhaps both physically and emotionally). Enormous thanks to you and your company for a most unexpected and glorious evening. Oh and, one final thing, both Amy and I thought afterwards that there was an enormous amount to be done with this work, that it could explore itself and develop further. More, Nicole, your audience wants more!

By Matt Cummins, Dance City, Newcastle, on the 17 of September.